Secret Service Warns Of Putting Too Much Info On The Web CBS Dallas / Fort Worth – News, Sports, Weather, Traffic and the Best of DFW

Secret Service Warns Of Putting Too Much Info On The Web CBS Dallas / Fort Worth – News, Sports, Weather, Traffic and the Best of DFW
No comments:

The Kennedy Detail (A book review)

Review of The Kennedy Detail

By Lee Scott
"It was one of those rare moments in history when time stood still and people the world over remember where they were and what they were doing."
I was at Ernie's gas station, hanging out with the guys. Ernie always kept the TV on, so we were all aware of the events in Dallas. It was surreal. The usual banter was gone. We were West Virginians - our state had put him in over the top. Our president was dead.
One of the younger neighborhood boys wandered in. He stood there, as we silently watched the TV. Then he said he was glad the Catholic ***** was dead, obviously mouthing words he had heard a prejudiced parent say.
All eyes turned his way. Then one, then another, started hitting him. Surrounded, he crumpled on the floor, a bloody mess. The group backed away. He got up crying and ran home. We turned back to the television. Not another word was said.
"The Kennedy Detail," which comes out Tuesday, is a book by and about the Secret Service agents whose job it was to protect the president that day. It will bring the memories and emotions flooding back.
Written by former agent Gerald Blaine and journalist Lisa McCubbin, it gives an intimate, behind- the-scenes account of the Kennedy presidency, those fateful minutes in Dallas and the mournful aftermath.
It has been 50 years since John Fitzgerald Kennedy was elected and most of the Secret Service agents, especially those closest to the Kennedys, have not uttered a word about this period outside of their official statements about the assassination.
Although Blaine is listed as the author, he gives credit to the other agents, both living and deceased, who contributed saved memoranda, reports, personal memoirs, oral histories and other correspondence to the effort. Clint Hill, who was on Mrs. Kennedy's detail, was particularly forthcoming, sharing with Blaine information that he had never before made public.
The shared guilt literally oozes from pages - their sole mission was to protect the president and they failed - as Blaine takes us back to the beginning when the agents were sent to Palm Beach to cover then President-elect Kennedy.
The stressed-out agents would soon realize their job would change radically covering the highly charged "Boss," his lovely, and extremely popular, young wife and their budding family.
We follow the Kennedys through the Camelot years with detail and insight presented in an almost reverential fashion. The Kennedys liked the agents, and the agents liked them.
Although anecdotes abound, conspiracy theorists will find little support in this straight-forward rendition. Blaine does try to refute some of the "tabloid fodder," especially that surrounding Marilyn Monroe.
Hill's account of the actual assassination - he was the agent who jumped on the back of the car - and the confusion at the hospital is tough to read, but one that has needed to be told.
And what most don't realize, once the president was declared dead, the exhausted, confused, emotionally overwrought agents' job was not over - they had a new president to protect.
This extraordinary work will not be the last account of what went on in Dallas, but it will be one referred to by all future writers.
Blaine's revelation that he almost shot new President Lyndon Johnson the night after the assassination is the sound bite that will be overused when referring to this book, but the poignant passages describing the interaction between the agents and Mrs. Kennedy and her children are what will ensure that it will be read and cried over.
Lee Scott lives in Avondale.
No comments:

Here is a list of confirmed events. Check back often as new events are being added every day.


THE KENNEDY DETAIL – CALENDAR OF EVENTS
RADIO AND TELEVISION

Join us for a once in a lifetime opportunity to meet two Kennedy Detail Secret Service agents, and get your personal copy of The Kennedy Detail: JFK's Secret Service Agents Break Their Silence signed by these living legends.  Joining Jerry Blaine and I for a book signing at Barnes & Noble in New York City on Thursday, November 11, will be Clint Hill, who wrote the Foreword.

In the writing of The Kennedy Detail, I have had the honor and privilege of getting to know these two amazing men, and trust me, you don't want to miss this.  If you have a Kennedy fan in your family, what better Christmas present than a signed copy of The Kennedy Detail?

The Kennedy Detail to be released November 2, 2010 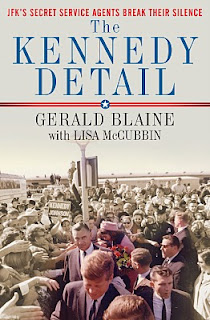 Simon & Schuster has announced that The Kennedy Detail: JFK's Secret Service Agents Break Their Silence will be released November 2, 2010. Jerry Blaine and I will be on a book tour that is scheduled to include New York City, Dallas, San Francisco, San Diego, Los Angeles and Washington, D.C.  We are thrilled to be joined by former Secret Service Agent Clint Hill who wrote the Foreword and contributed a great deal to the book.
No comments: