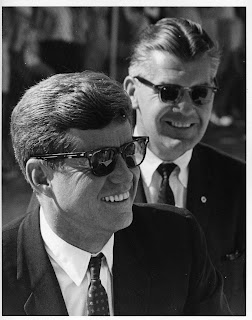 Mrs. Kennedy arranged a surprise birthday party on the yacht Sequoia for family and close friends.

Happy Birthday, Mr. President.  May you rest in peace.
No comments:


By Leon Bibb CLEVELAND - A former U.S. presidential secret service agent, who was with President John Kennedy the day the president was assasinated, now walks the quiet halls of the Western Reserve Historical Society, a Cleveland museum dedicated to the history of Northeast Ohio.
Paul Landis was in Dallas as part of the Kennedy secret service detail November 22, 1963, when bullets flashed through the sunlit Texas air, striking the president, killing him.

"I heard the gunshot," said Landis. "It came over my right shoulder."

Landis was within a few feet of the presidential limousine, the top of which had been removed at the president's request. Movies of that day show Landis and several other secret service agents trailing the limousine as each man watched for any unusual movement in the crowds of people who had lined Dallas streets to get a view of the nation's chief executive.

Landis said when he heard the first shot, his eyes turned toward where he thought the shot had originated. Still searching the crowd, there came another shot in quick succession.

"And when my eyes came back to the president again, it was a third shot and that  was the one that hit him in the head," Landis remembered.

Dressed in a blue sweater with an shirt underneath, Landis sat quietly in one of the rooms of the Western Reserve Historical Society, where he has worked as a security guard for many years. Without emotion, he told the story of how he had joined the Secret Service.

After a time on the force, he was transferred to duty at the White House, where his responsibilities included guarding First Lady Jacqueline Kennedy and the couple's children, Caroline and John Jr.
Photographs in a book, "The Kennedy Detail," written by former JFK secret service agent Gerald Blaine, show the men of the security team assigned to the White House. Throughout, there are photographs of Landis with the Kennedy children or Mrs. Kennedy.

In one photograph, Landis is running alongside a galloping horse ridden by Caroline. On the book's cover is a picture of President and Mrs. Kennedy shaking hands with supporters at the Dallas Airport only moments before they rode in the motorcade toward Dealey Plaza, site of the fatal shooting of the president.

In the cover photograph is Landis, wearing sunglasses, in between the President and Mrs. Kennedy. All around there are smiles, including on the First Couple's faces. Minutes later, the smiles through Dallas and the rest of the United States, and much of the world would turn to grieving and mourning faces.

"We had a job to do and that was to protect the president or whomever we were assigned to and if you fail, you fail," he said.

Landis said he and the other agents were haunted by the assassination. He said he grieved inwardly for decades. Oddly, he said, agents rarely spoke of their inner feelings on the death of the president. There was no professional psychological counseling for the Secret Service agents who witnessed the murder of the president.

"No, that wasn't even thought of and heard of," said Landis, matter-of-factly. But the hurt was there in his mind and in his memory. "Very much so," he added.

It was Blaine's 2010 book that prompted the Secret Service agents from the 1963 White House to gather and tell their stories in support of each other. The Discovery Channel produced a documentary, "The Kennedy Detail," where each man told his story of the assassination and how it had impacted the life of each.

"Up until then, I never said much about the Secret Service or of working on the presidential detail in 1963," said Landis. "The conversation would always then turn to the assassination."

It was Blaine's book and the documentary, which provided a therapy for Landis.

"That's the best thing that's happened to me since the assassination," said Landis.
He added he is no longer haunted by the event that day, which many sociologists contend robbed American of an innocence. He now talks teasily of the Kennedy Detail and of what he saw and heard that November day in Dallas.

From that day, presidents were secured even more. Landis noted how heavily armed agents are these days, although their weapons are not easily visible under their jackets.

At Parkland Hospital, where President Kennedy was rushed, Landis sat in a hallway with Mrs. Kennedy. He said she stared into space and said nothing. The nation saw her that day, dressed in a pink suit with a matching pillbox hat, which she had helped make popular.

In the hospital, on the Air Force Once trip back to Washington, and in front of the television news cameras that captured her image as she left the presidential jet, the world saw the blood of President Kennedy on her skirt with trails of blood running along her legs.

She had cradled John Kennedy's head in the backset of the limousine as it sped from Dealey Plaza to Parkland Hospital.

At the WRHS, Landis' job is to walk its hallways and guard the items that are housed in the museum. One of the items there, ironically, is a Lincoln Continental convertible, similar to the car in which President Kennedy rode in that day in Dallas.

For Landis, memories of the assassination are never far away. Forty-eight years later, he said they surface at times. He is talking about that day which, he said, at times seems far away. Certainly, however, it was turning point in his life. He was guarding the president the day shots blasted through the air, fataling striking President John Fitzgerald Kennedy.

A year later, Landis left the U.S. Secret Service.  He has lived quietly in a Cleveland suburb since 1975.
1 comment:

When conspiracy theories started to run rampant in the months and years after the assassination of former President John F. Kennedy, the Secret Service agents who protected him made very few statements about them.

But when former Secret Service agent Jerry Blaine retired, he began reading some of the theories online, and ideas claiming presidential drivers or agents had a hand in the murder “got personal,” he said.

“What the agents decided to do is set the record straight and make sure we at least had a say in history,” Blaine said Saturday while discussing his book “The Kennedy Detail” at Anderson’s Bookshop in downtown Naperville. “It was not until June of last year that we sat down and emotionally discussed the assassination.”

Blaine joined co-author and former Naperville resident Lisa McCubbin and former Secret Service agent Clint Hill for the discussion and book signing attended by about 200 people.
Blaine described the hectic routine of his job as one of less than 50 men assigned to protect Kennedy and his family.

And Hill, one of the agents closest to Kennedy when shots were fired, told the assassination story from his point of view.

On what was a warm November day in Dallas, windows were open at the high-rises surrounding the streets where the president’s vehicles proceeded to a campaign stop, Hill said. He was scanning a building to his left when he heard an “explosive noise” from his right, which turned out to be the first gunshot fired from a sixth-story window by Lee Harvey Oswald.

After the first shot:
“What I saw was the president grabbing at his throat and moving to the left,” Hill said, speaking quickly, as though his words were memorized and well-practiced. “I knew he was in trouble and something was wrong.”

After the second shot:
Hill said he tried to “cover and evacuate,” a Secret Service technique that would have allowed his body to block those of the president and Jackie Kennedy.

After the third shot:
Hill saw a “gaping hole” in Kennedy’s head as blood, brains and bone sprayed out from the gunshot wound, covering his clothing as well as Jackie Kennedy’s.

“I assumed the wound was fatal,” Hill said.

In an era of what Blaine called “pre-technology agents,” grief counseling wasn’t available after the assassination. Neither was time to discuss the tragedy and its emotional effects.

“One thing you never got on the detail was sleep,” Blaine said. “After you finished 20-hour days, all you could do to wind down was talk to the guys you worked with. . . . We became like brothers because we spent our entire lives together. We were traveling 80 percent of the time.”

Writing “The Kennedy Detail” helped Blaine, Hill and the other agents McCubbin interviewed finally to speak about Kennedy’s assassination and find a bit of an emotional release, McCubbin said.
“It turned out to be a real healing process for these men writing this book,” she said.